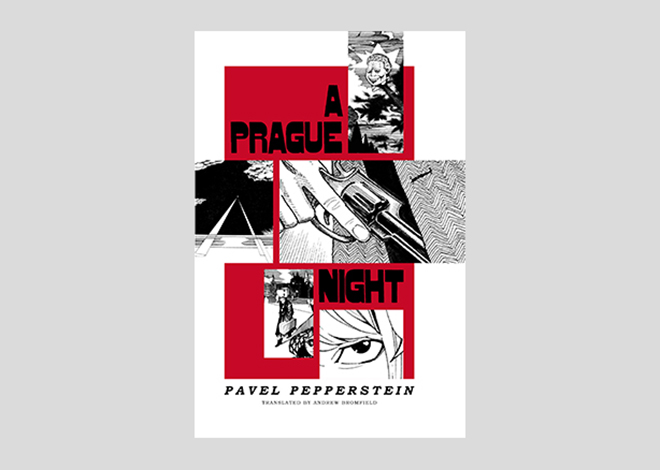 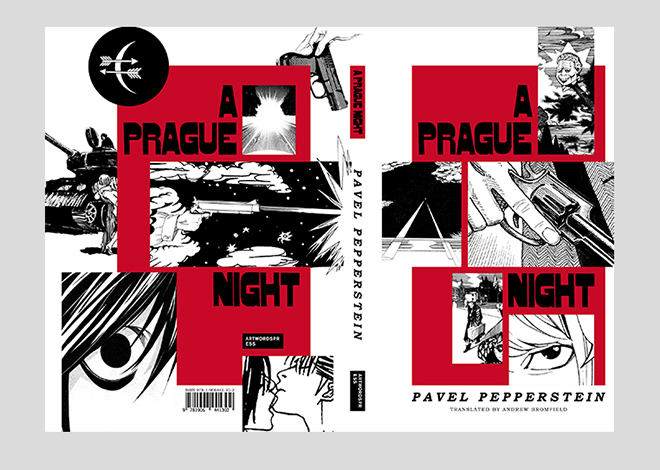 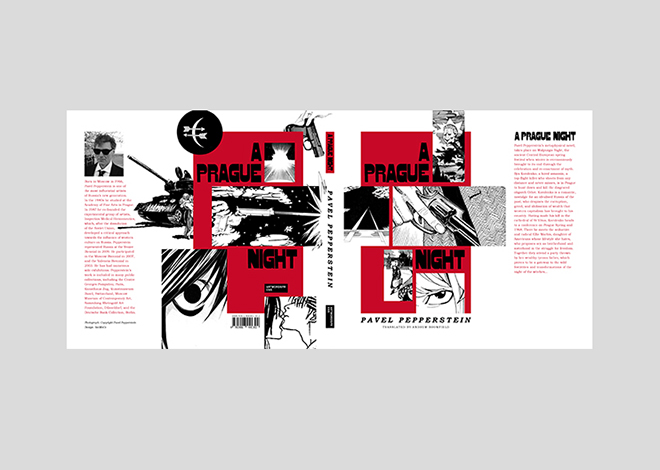 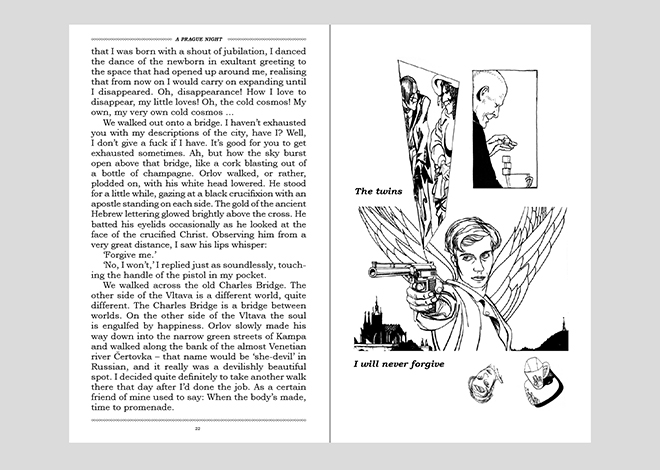 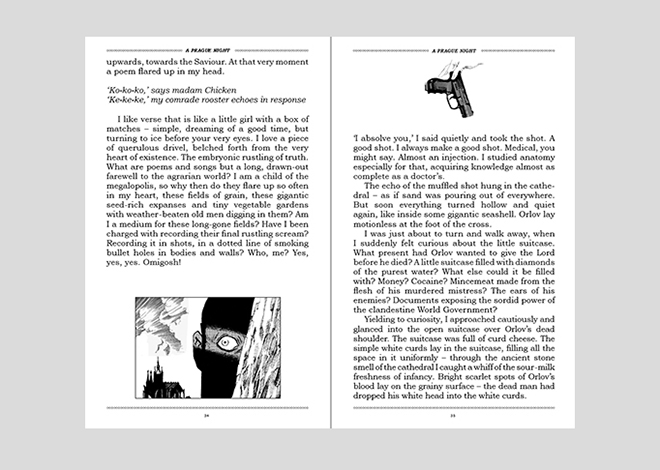 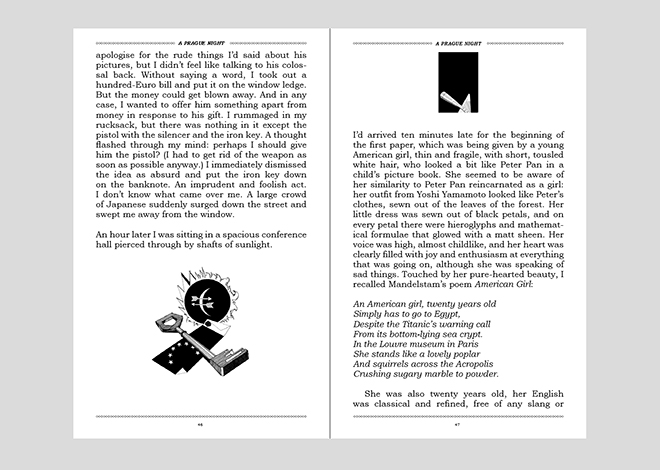 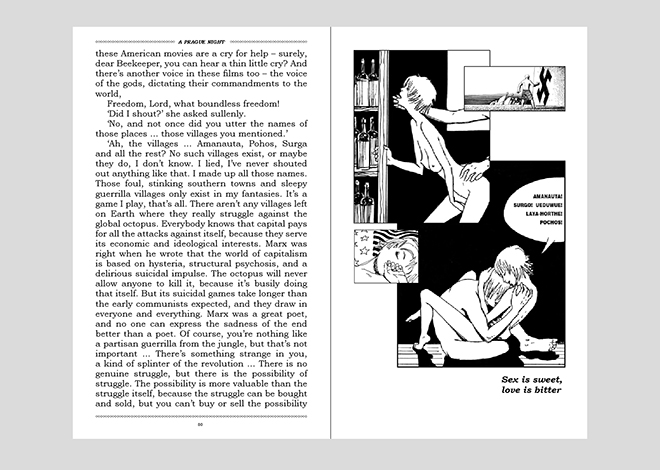 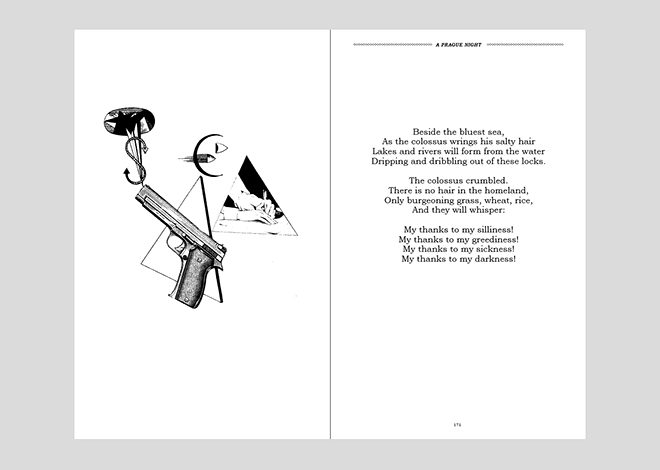 The first novel designed by SecMoCo – for Artwords Press (the publishing arm of Artwords Bookshop)- is a strange, poetic and philosophical thriller written by Pavel Pepperstein, one of the most influential artists of Russia’s new generation (here translated by Andrew Bromfield). The post-communist critique, along with the comprehensive and yet quirky comic book-like illustrations seemed to suggest an (almost oxymoronic) ‘upmarket samizdat’ style and dynamic tension was required.

Synopsis
A Prague Night, Pavel Pepperstein’s metaphysical novel, takes place on Walpurgis Night, the ancient Central European spring festival when winter is ceremoniously brought to its end through the celebration and re-enactment of myth. Ilya Korolenko, a hired assassin, a top-flight killer who shoots from any distance and never misses, is in Prague to hunt down and kill the disgraced oligarch Orlov. Korolenko is a romantic, nostalgic for an idealised Russia of the past, who despises the corruption, greed, and idolisation of wealth that western capitalism has brought to his country. Having made his kill in the cathedral of St Vitus, Korolenko heads to a conference on Prague Spring and 1968. There he meets the seductive and radical Ellie Warbis, daughter of Americans whose lifestyle she hates, who proposes sex as brotherhood and sisterhood in the struggle for freedom. Together they attend a party thrown by her wealthy tycoon father, which proves to be a gateway to the wild festivities and transformations of the night of the witches…

At first I refused. They tried to persuade me, they even showed me a secret film about him, taken with a concealed camera, but the sight of tortured cooperative entrepreneurs made no impression on me. It was clear enough anyway that the client deserved to die. I refused again. I couldn’t be bothered somehow.
But then one day, as I was wandering round the old Moscow courtyards I had loved since I was a child, I approached a certain little house that I adored passionately. I had looked at that house for as long as I could remember, on summer evenings and winter evenings, and it had always been uninhabited, with its windows solidly boarded up. Dilapidated and mysterious, the tiny mansion was hidden away in the dense blackness of impossibly beautiful trees, and the gaze of its stucco fauns and nymphs, whether covered in poplar fluff, petals or snow, was imbued with a delicate, enigmatic humour; eternal youth shone in their faces, and ironical dust accumulated in the dimples on their cheeks. Yes, they were young and happy, those ancient dryads and bacchuses, those little nereid girls hurtling along on dolphins above the deep, indifferent windows. I had never seen anyone go inside or come out; left to its own devices, everything here had frozen in its own freedom and mystery. Oh, how I love places like that! They are the reason why I have stayed on this planet.
But now I saw that the house was surrounded by a new fence of corrugated steel, and an expression of fright had appeared on the faces of the nymphs; the little house itself, in fact, was gazing out from behind the fence like a prisoner. Yes, it had been condemned. And the beautiful trees making up its magical retinue had been condemned too: a huge billboard towering over the steel fence depicted the new building that would soon rise up here: a ghastly-blue wedge shape with spectacular square windows and a pseudo-classical portico. A bank. I read the name of the bank and immediately recalled who owned it. The next day I called my acquaintances and accepted their offer.