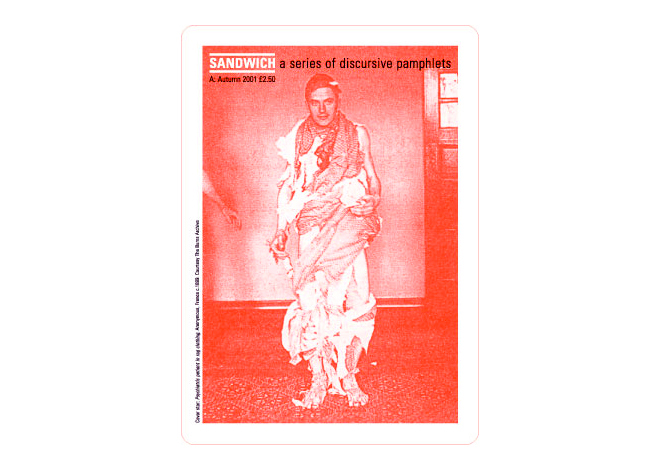 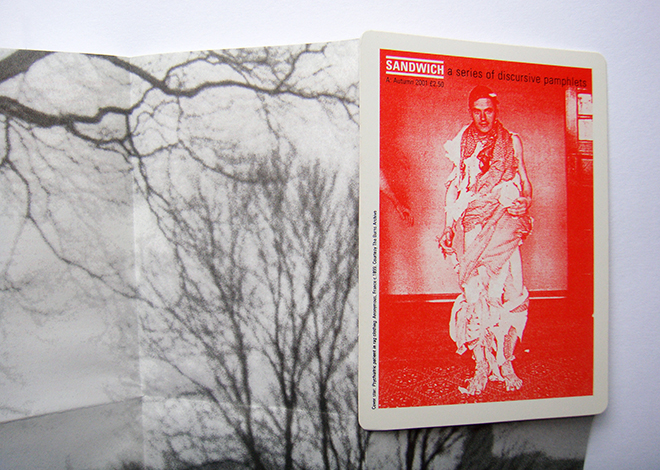 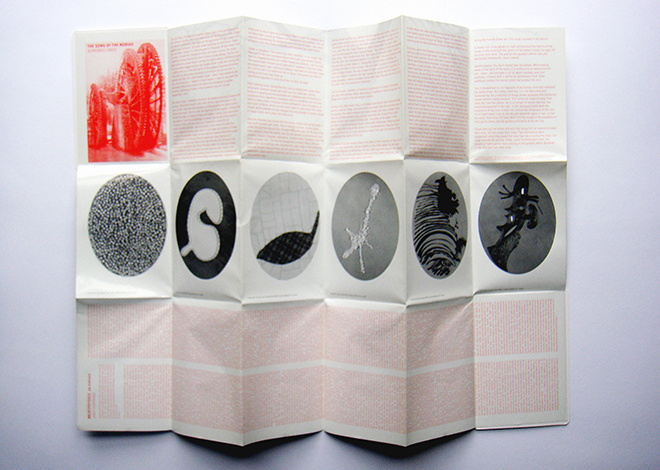 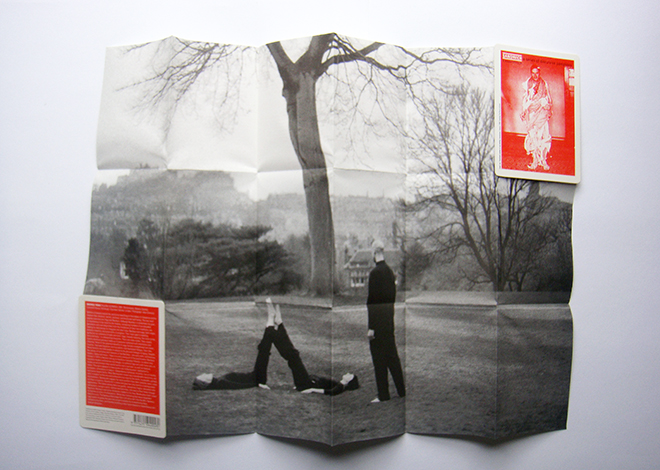 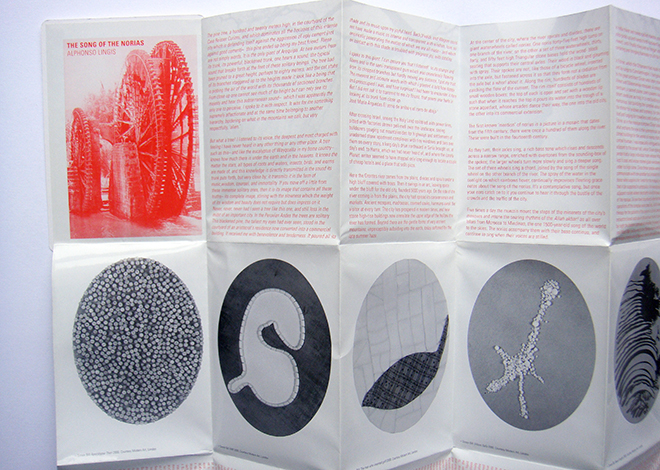 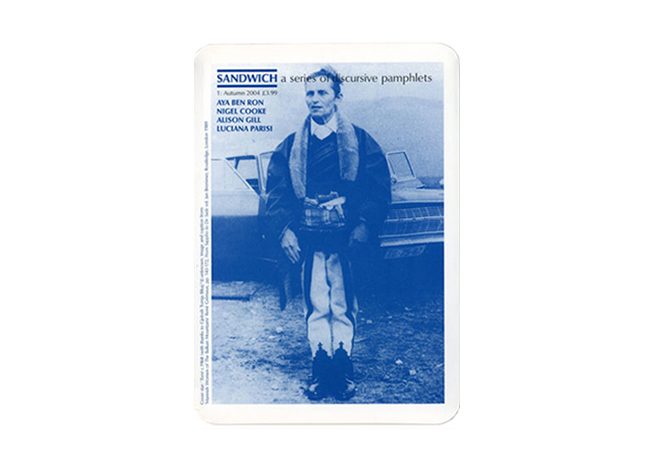 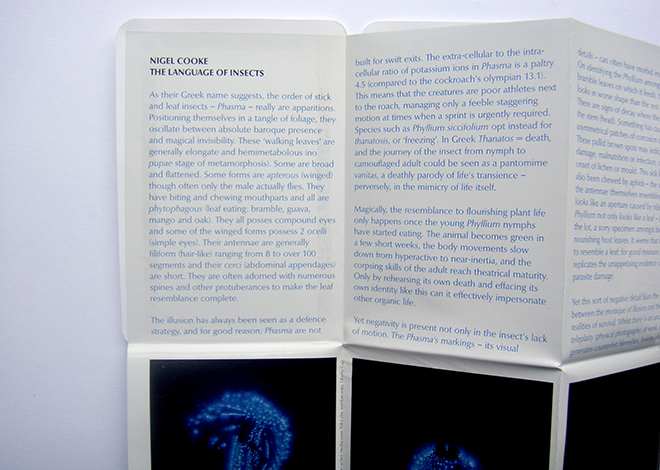 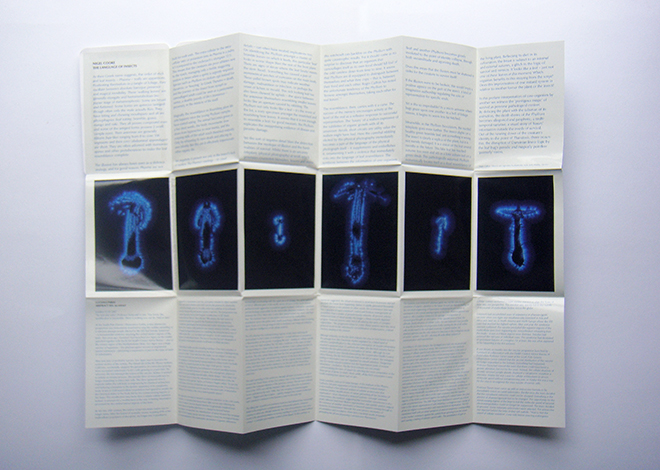 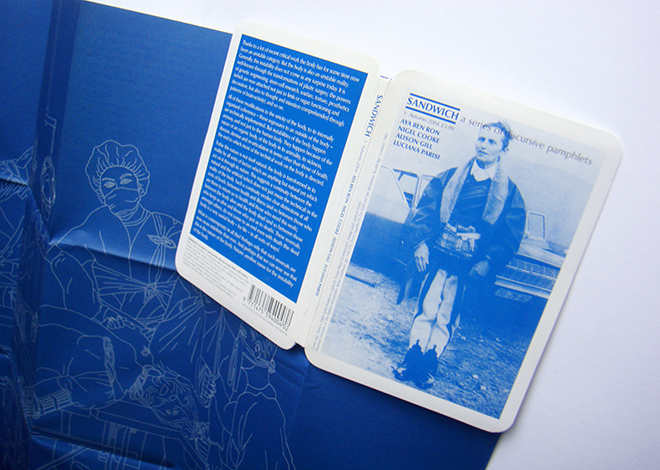 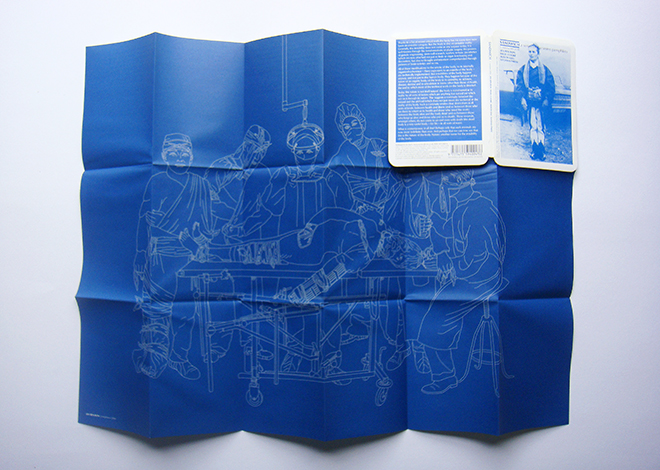 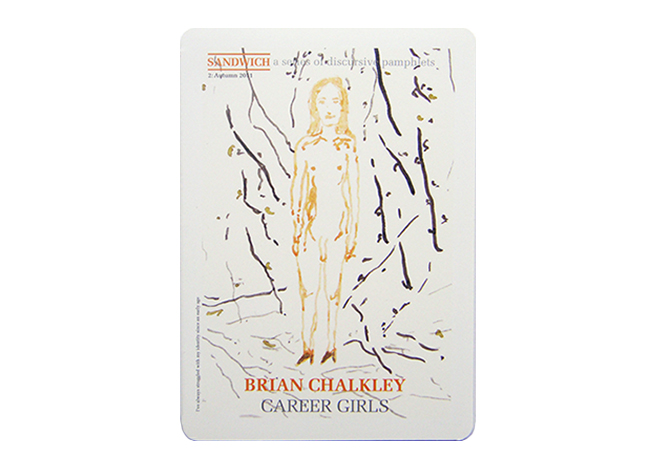 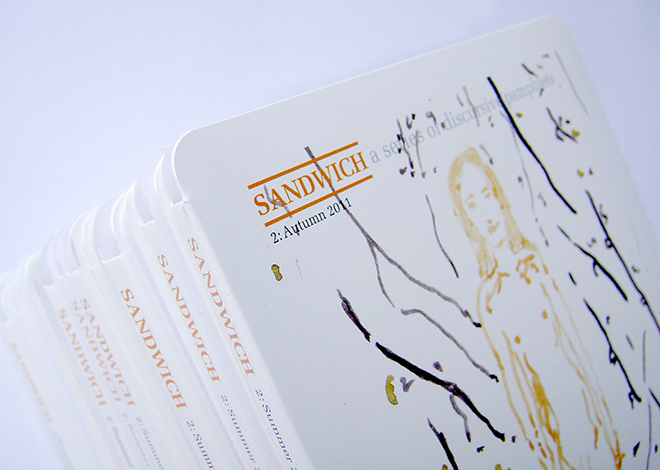 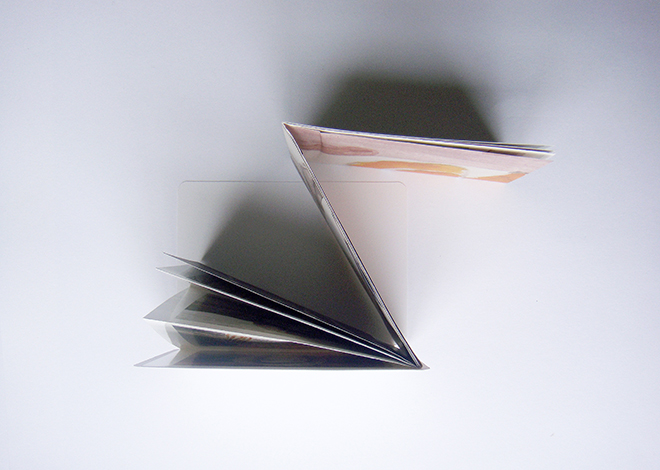 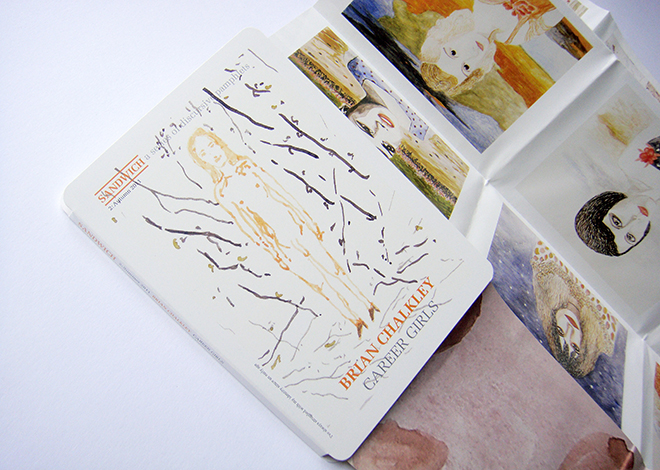 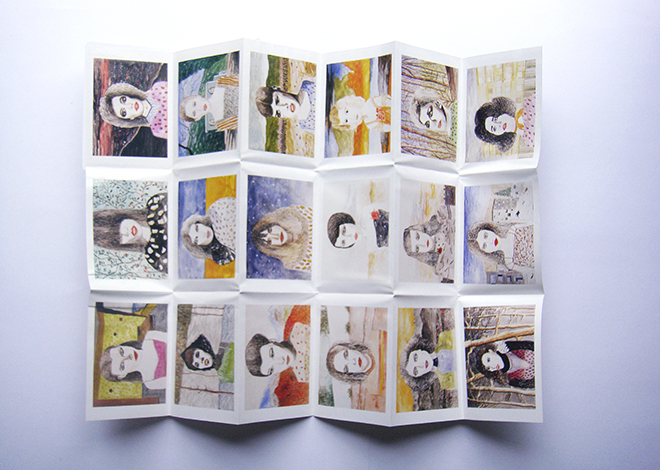 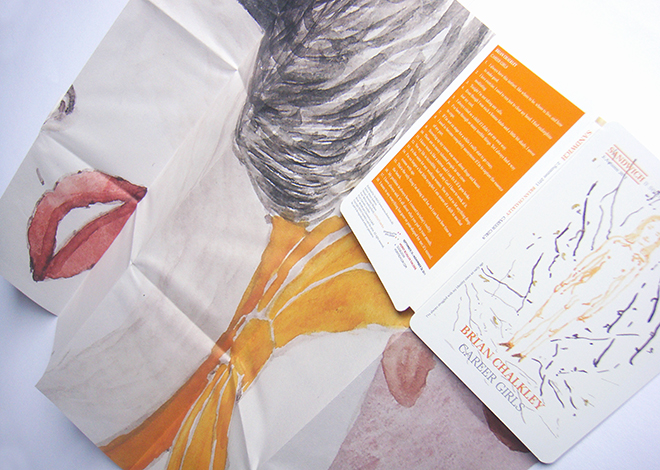 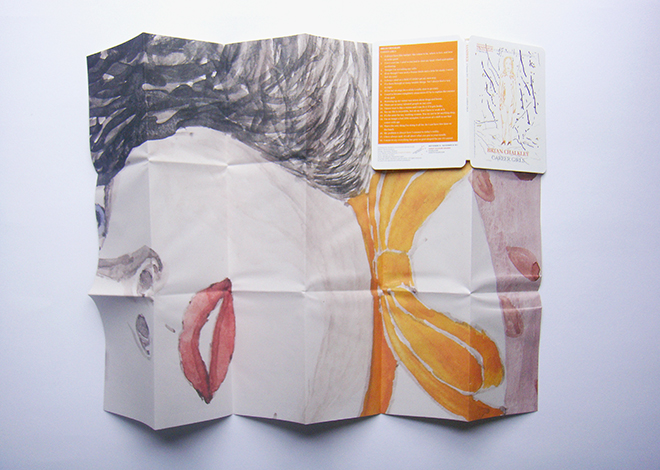 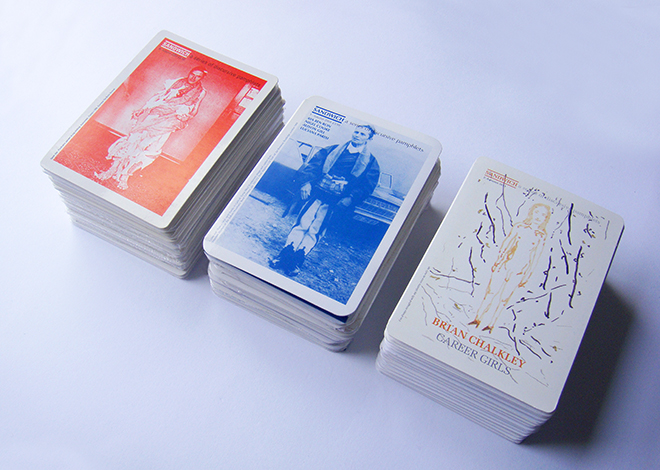 SANDWICH
A series of discursive pamphlets

First published in 2001, this experimental series pursued a design-led conjunction of art and theory. Contributors included philosophers, artists, and artist-writers, and sought to operate at the constantly shifting point between the two poles of popular ‘take-up’, and academic reflection.

Where academic writing may put a break on art and its concepts, in the popular realm the same ideas can circulate quite freely. If anything they are thereby accelerated, propelling thought at greater velocity. To provide a new, faster, and looser form of print communication Sandwich showcased commissioned writing and art from contemporary theorists and practitioners that were conceptual and reflective but could be accessed in a popular format, following the pamphlet/chapbook tradition.

As such it was hoped it may push, from both ends, a redirection of what writing about art and aesthetics might be. To this end, Sandwich attempted to harness the effective power of the popular through both content and form.

Each issue consisted of 1xA2 sheet, folding down to A6, with 2x cover boards affixed to the top and bottom of the folded sheet.
-A2 Sheet front: x2 commissioned texts plus 1x commissioned artwork, the latter ‘sandwiched’ between the former.
-A2 Sheet reverse: full size poster, commissioned image/text project

Mainly for economic reasons only two issues of Sandwich were generated, but as an effect of the distribution/circulation of those issues I was approached in 2011 by the artist Brian Chalkley to produce another issue as the accompanying publication for his exhibition at the Horst Schuler Galerie, in Dusseldorf, Germany. I used this as an opportunity to test the formal flexibility and durable potential of the format.

The first issue was included in the book NoBrief: Graphic Designer’s Personal Projects (RotoVison, 2002). Selected and edited by John O’Reilly, his commentary within provides a more than decent account of the form and content:‘This art pamphlet opens up to a full poster. On one side there is an image of a work by Paulina Olowska called ‘Bauhaus Yoga’, with an essay by her in the bottom-left-hand corner, which is the back of the pamphlet.The cardboard cover is in the top-right-hand corner, hence the title ‘Sandwich’. The other side contains, among other items, an essay called ‘Meatphysics’ by artist Jake Chapman.This is the first issue of Sandwich and is as much an object in itself as a forum for artists and writers. Designer Simon Josebury’s work for London’s Cabinet gallery has meant that this pamphlet has a unique perspective that is both highly intellectual and raw’.

Testing
Sandwich existed as a journal but also as a pamphlet/broadsheet/poster, a formally delimited space, but one with infinite potential, where text and image could combine to generate new meanings.